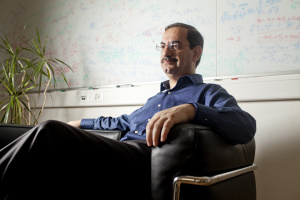 Professor and Dean of the School of Engineering, Ali H. Sayed, has been awarded the 2022 IEEE Fourier Award for his “contributions to the theory and practice of adaptive signal processing.”

Ali H. Sayed, who received the prestigious award from the IEEE, is Dean of the School of Engineering at EPFL where he leads the Adaptive Systems laboratory. He has also served as Distinguished Professor and Chairman of Electrical Engineering at UCLA. He is recognized as a Highly Cited Researcher and is a member of the US National Academy of Engineering (NAE). He served as President of the IEEE Signal Processing Society during 2018 and 2019.

The IEEE Fourier Award for Signal Processing is a Technical Field Award that recognizes “outstanding contribution to the advancement of signal processing, other than in the areas of speech and audio processing”. The winner is judged on the basis of the impact on the field of signal processing technology, including innovation, leadership, honors or seminal contributions as evidenced by publications or patents or transition to practice, and quality of the nomination.

This is the third recognition that Dean Sayed receives this year for his research contributions, besides the 2020 IEEE Wiener Society Award for his “contributions to adaptive and statistical signal processing and outstanding leadership in the Signal Processing Society,” and his election to the World Academy of Sciences (TWAS) for his “contributions to adaptation and learning theories in electrical and computer engineering.” He has also been appointed recently as the founding Editor-in-Chief of a new Open-Access Book Series on Information and Learning Sciences.

An accomplished researcher and prolific author, Professor Sayed is the author or co-author of six books and over 550 scholarly publications. He is recognized internationally for his leadership in the broad area of statistical and adaptive signal processing. His research involves several areas including adaptation and learning theories, data and network sciences, statistical inference, and multiagent systems. He has published authoritative textbooks on the subject of adaptation and learning, which are used as references at many institutions: Fundamentals of Adaptive Filtering (Wiley, 2003) and Adaptive Filters (Wiley, 2008). The first textbook was recognized for its quality and awarded the 2005 Terman Award from the American Society of Engineering Education. In 2015, he received the Education Award from the IEEE Signal Processing Society for the “writing of scholarly and influential texts in the areas of adaptive systems and statistical signal processing.” In 2014, he was also awarded the Athanasios Papoulis Award from the European Association for Signal Processing for his “fundamental contributions to the advancement of research and education.” In 2013, he received the Meritorious Service Award from the IEEE Signal Processing Society for his “exemplary service to and leadership in the Signal Processing Society.”

Professor Sayed’s research deals with the analysis and design of adaptive systems with self-learning and cognitive abilities. These systems continually learn from interactions with their environment through observations. His group’s contributions to the field have taken adaptation to a new level, including the development of the energy conservation approach to analyze such systems and the introduction of adaptive networks and diffusion learning. His contributions to the field have also been recognized recently by the 2020 Norbert Wiener Society Award from the IEEE Signal Processing Society. This award is the Society’s highest honor. It recognizes outstanding technical contributions and leadership in the field. He delivered the Wiener Lecture (video here) this past June at the 2021 flagship conference for the Society.