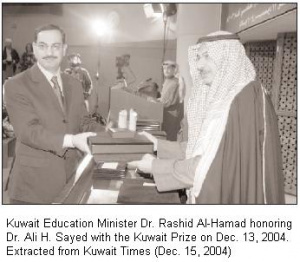 Professor Sayed has been awarded the 2003 Kuwait Prize in Basic Sciences for his extensive research contributions in the areas of adaptation and learning. The Kuwait Prize is one of the highest honors awarded in Kuwait for intellectual achievement. The honor includes a monetary award, a gold medal, the shield of the Kuwait Foundation for the Advancement of Science, and a certificate of recognition. The Kuwait Prize is awarded annually in five fields ranging from Basic Sciences to Arts and Letters and Social Sciences. Prof. Sayed traveled to Kuwait to receive the award in Dec. 2004 and delivered a public lecture “On the Role of Adaptation in Modern Technologies” at Kuwait University.